The first impression of the SONIC ANEMO DZP is very good. It’s more accurate, sensitive and responsive, as shown in the graphs, than the ever valid Davis cup anemometer. But as you probably know, sonic anemometers are another story.
The first graph shows the data of one normal episode of the wind bora, nearby the Gulf of Trieste, in the locality of Bagnoli della Rosandra – Boljunec (Trieste) 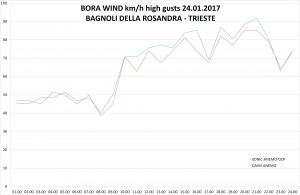 Please note that the cups anemometers have frequently a well known “overspeeding error” and the DAVIS also has a software correction to compensate a supposed loss of speed for different wind angles (this is the reason that with the Davis cup anemometer you have to choose and set the cup size in the WeatherLink software to large or small. Only the option “Vue or other” is without correction, this is ok for the SONIC ANEMO DZP!). So, the differences would probably be greater. 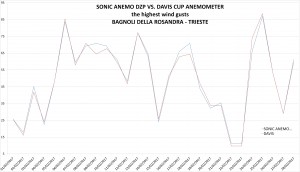 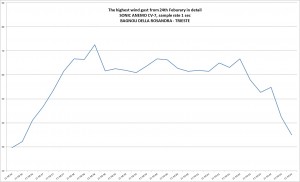 As you can see in the graph, the CV-7 E measured the highest, very short gust (lasted only about 0,25 sec) 72,6 km/h and a lot of short gusts (lasted about 0,25 sec) of 66 km/h or less. So the data of 74 km/h, measured from the Davis cup anemometer, is not really. Don’t forget, that the Davis cup anemometer measures the average wind speed of 2,25 seconds, so it is impossible, that the average speed of the Davis could be higher than an istantaneous measurement of the CV-7 E.

On the graph you can also see the strong wind acceleration from 30 km/h to more than 70 km/h in 2 seconds. So probably the software correction of the Davis cup anemometer is gone overboard and maybe there was also an overspeeding error.
The SONIC ANEMO DZP is more reactive and accurate than the Davis cup anemometer, it hasn’t typical overspeed errors of cup anemometers and don’t need software corrections, which can, as we can see in the graphs, sometimes influence the data.
The last graph illustrates the average wind speed in February. 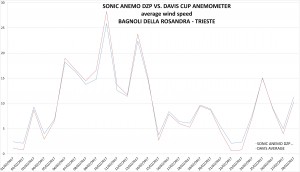